I  was propped on a bed at my maternal grandfather’s place. I struck a lottery when I found for novels stowed away in a corner of a cupboard.

There’s Arthur Hailey & Sidney Sheldon apart from Mitch Albom. Unfortunately, the edges of the first fifty pages or so of Hailey’s first novel (guess which one?) have been munched away.

But that’s okay. I still have the others. I feel like hugging all these old books with their yellowing pages and cracking spines with all the strength in my arms. Books are such absurd things; they enchant despite shoddiness that time slaps from cover to cover.

Mitch Albom has a way with words.

END_OF_DOCUMENT_TOKEN_TO_BE_REPLACED

Desu Noto follows high schooler Yagami Light as a notebook becomes his instrument to deliver justice to the masses and later, means to greater evil.

I have been following Bleach for a few years now, so the first episode that shows goody two shoes Yagami aceing his national tests all over again elicited a poker face from me because Bleach had a similar beginning and two, from the looks of it, did not seem like the most fun series.

Death gods or shinigami are a lazy lot in DN, much unlike those in the Seireitei; while Bleach happened to take on a fight-styled approach to the general concept of a system of Death gods, creator Tsugomi Ohba chose to spin a suspenseful yarn instead. The Shinigami world is an apt reflection of their rottenness. On one such nondescript day, a death god drops his death note.

‘It may get interesting.’

The Death Note seems like a boring bunch of pages strung together.

The human whose name is written in this notebook shall die.

Like all tools, the borders around this notebook’s actions and its impact are chalked out by its user.

As the story progresses, Smarty Pants Light unravels more of the finer intricacies that hang around the Death Note over time, with Ryuk spending his days in the Yagami household; his mission in the human world was probably to the rid the world of all its apples. 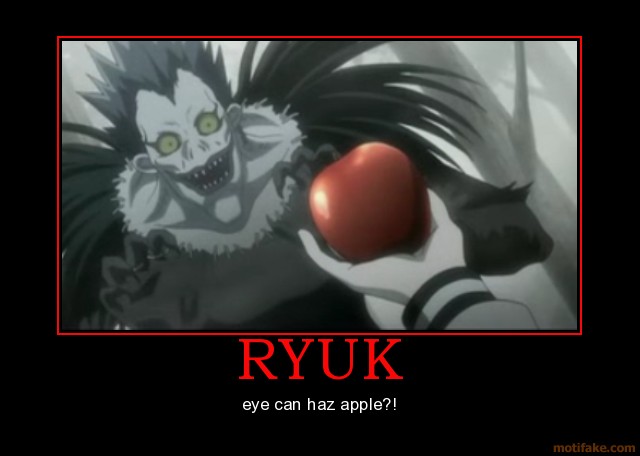 Remember when Uncle Ben said that with ‘great power comes great responsibility’? It wasn’t only the spider bites he meant. When you gain unbridled, an unaccounted-for power with no god, you lose all semblance of society-stamped-and-approved human traits and end up at the mercy of your peremptory whims. END_OF_DOCUMENT_TOKEN_TO_BE_REPLACED