He ambled down the stairs to the dingy room in the farther corner of the basement. Shutting the door behind him, the janitor flexed his muscles as he stifled a yawn. The night would be long, with a topping of some backbreaking cleaning to do.

In an unbroken ritual of sorts, he cleaned his toolbox and reorganized his plumber’s kit.
Armed with his ‘briefcase’ (why, his trusty mop and duster)and a bucket of water, he climbed back to the second floor.

He had been sweeping the office floor for only a while when he felt water under his boots. He grunted listlessly: he always managed to ruin a good pair, pants or boots. He turned up the lights a little and discovered that it was a large pool of blood.

He called out, tip-toeing in the direction of the blood flowing free as a river.

He thought he saw the outline of a woman in the dark. She did not have one hand.

He quickly switched on the lights: there was no one in the men’s restroom.

WordPress, much like Twitter, is a serendipitous place. It was a day like any other when I landed at David Swan’s weblog on one of my many bloggy adventures. Fresh off from a suit-and-tie job he’s been at for a good 10 years, David has now taken up writing as his major occupation. (Follow-the-heart awesomeness, right?)

Proud and nervous: he is the father of the first work of writing he is justifiably pacing-all-over-the-place anxious about. 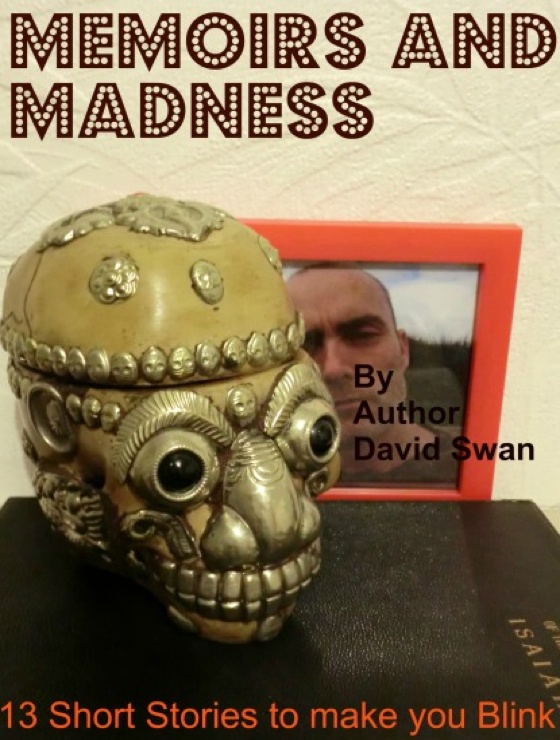 Memoirs and Madness by David Swan

Memoirs and Madness is an eclectic collection of short stories that cover a wide base, playing in on popular public fantasy (read as werewolves) with growling ease, post-apocalyptic frustration to trippy quests and Dalama-esque truths; strange obsessions and stranger truths, and then over to reincarnated revenge in a crisp light and engaging language; some of Swan’s work seems influenced by his journey towards Buddhism. Narrators change with stories but the voice, sometimes careless and at others, snaking into your head…  cannot be ignored, as you read. They take mad, bizarre turns thrown in with a dash of hope, revenge and a pinch of lovemaking (which I must commend, David has annealed into his stories in ways that are anything but predictable): do not expect a Fifty Shades here.

Why would anyone name it Memoirs and Madness? Because it is exactly that.

“The most interesting thing about writing is the way that it obliterates time. Three hours seem like three minutes. Then there is the business of surprise. I never know what is coming next. The phrase that sounds in the head changes when it appears on the page. Then I start probing it with a pen, finding new meanings. Sometimes I burst out laughing at what is happening as I twist and turn sentences. Strange business, all in all. One never gets to the end of it. That’s why I go on, I suppose. To see what the next sentences I write will be.—The Art of Fiction No. 50“

As a collection, MaM makes for a glide down that newly laid tar-terrain outside your place. You can buy the 104-leaf Memoirs and Madness from Amazon for only $0.99 here